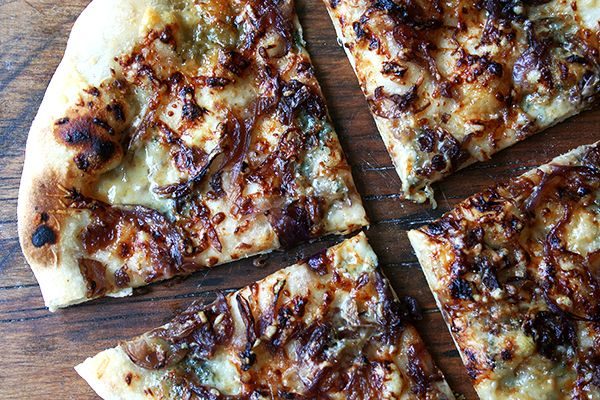 I think of blue cheese in two varieties. The first, a crumbly cheese used to sprinkle in salads, pasta and currently popular on steaks and burgers. The second is a creamy cheese to spread on crackers or bread. Penicillium cultures are added to the milk so that the final product is spotted or veined throughout with blue, blue-gray or blue-green mold. Some blue cheeses are injected with spores before the curds form and others have spores mixed in with the curds after they form.

Like champagne, blue cheese is believed to have been discovered by accident. The caves in which early cheeses were aged shared the properties of being temperature and moisture controlled environments, as well as being favorable to many varieties of mold. Roquefort is said to have been invented in 1070 AD. Gorgonzola is one of the oldest known blue cheeses, having been created around 879 AD, though it is said that it did not actually contain blue veins until around the 11th century. Stilton is a relatively new addition occurring sometime in the 18th century.

Not to be outdone by the Europeans, America’s ‘Maytag Blue Cheese’ was developed at Iowa State University in 1941. Production was begun by Fred Maytag II (yes, of the washer fame) when he heard about the new process. Maytag blue is also aged in specially designed caves and considered one of the best.

The smell of this cheese is widely considered to be pungent, even smelling like feet. This is due to the types of bacteria encouraged to grow on the cheese; for example, the bacterium brevibacterium linens, responsible for the pungent smell of many blue cheeses, is also the cause of human foot odor. Due to this strong smell and flavor, blue cheeses are often considered an acquired taste. With that said, I hope you are a blue cheese lover and enjoy this recipe!

Blend together oil, rosemary and pepper, brush over top side of pita bread and place on baking sheet.

Spread preserves evenly among the pitas, spreading almost to the edge. Top with cheese and walnuts.

Bake for about 8-10 minutes, or until cheese is melted.

Remove from oven, cut into pizza slices and serve while warm. Top with additional sprig of fresh rosemary if desired.